New parents are full of apprehension and questions regarding how to best take care of their newborn baby. When do babies start teething, is one of them. Questions ranging from what to feed to how to feed and more keep cropping up, and without a proper answer, parents can’t really do anything because it is hardly advisable to take a guess and risk doing something dangerous. One of the common queries they have is ” When do babies start teething ?”. So we are here to solve as many questions as we can regarding what order do baby teeth come in and everything related to it!

When the baby is first born, it doesn’t have any teeth, and the first teeth start appearing just a few months after birth. The first teeth that baby gets are milk teeth, also known as deciduous teeth or primary teeth, and they can appear in practically any order, though in most babies, a particular sequence is followed, till a total of 20 pearly white teeth are arranged in your child’s mouth. These teeth generally start falling to make a place for new teeth from the age of 8 to 10. Let’s look at the order in which the baby teeth start coming. 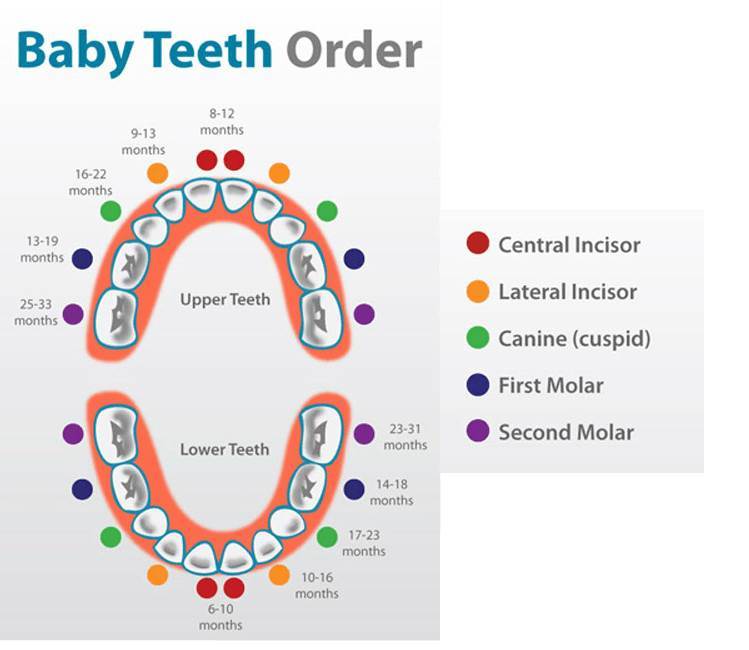 Know More About What Order Do Baby Teeth Come In

There are a total of 8 incisors, 4 in the upper jaw and 4 in the lower jaw. Generally, the first teeth to crop up in a baby’s mouth are the two middle lower incisors. These start coming up anytime between the months of 4 and 7 and are the first tools of biting for the baby. Soon after, the two middle incisors of the upper jaw follow, usually when the baby is between 8 months to 1-year-old. These 4 teeth are basically the tools that the baby can use to bite soft food items like small chunks of sweets. This is the first of the order that baby teeth come in.

After the first 4 central incisors of both the jaws are formed, the lateral incisors start to follow. This is the next in the order that baby teeth comes in. Between the months of 9 and 13, the baby starts to have the upper two lateral incisors, finishing the complete set of incisors for the upper jaw. As soon as the incisor set of the upper jaw is finished, the two lateral lower jaw incisors also start cropping up, usually when the baby is 10 months to 16 months old.

With the upper and lower incisor set complete, your baby is all set to bite soft food items with ease, and the added bonus is that you also get to see the first cute toothy smile of your infant.

The first two molars of the upper jaw erupt when the child is about 13 to 19 months old. These are the first of the chewing teeth that erupt in a child’s mouth, however, these can’t do much by themselves until the first two molars of the lower jaw come up, which usually happens when the child is between 14 and 18 months old. Now your child can start chewing food little by little.

Still concerned of what order do baby teeth come in?

The canines, also known as the cuspid or the dog teeth, are the next to follow in the order of the baby teeth after the first molars of the upper and lower jaw erupt. There are 4 canines, 2 in the upper jaw and 2 in the lower jaw, and they take the place between the incisors and the first molars and generally help with tearing food apart.

The two upper canines are the first to come up, and are usually seen in the child at the age of 16 months to 22 months. The lower two canines follow quickly enough, once the child is around 17 months to 23 months old. Now your child can give his or her first full smile with no gaps in the front. The fact that baby or milk teeth are whiter than permanent teeth makes their smile all the brighter.

To answer further of what order do baby teeth come in and with 16 teeth already done, there are only 4 more teeth left to finish the set of your child’s first milk teeth. After the canines, it is time for the rest of the molars to make their appearance. After the four first molars that are already done, the next four molars start to erupt. Between them, months of 23 and 31, the two-second molars of your child’s lower jaw come out. By this stage, the pain of teething generally ceases and the child hardly even notices the growth of the new teeth.

Soon to follow, between the months of 25 and 33, are the two-second molars of the upper jaw. These are the rear teeth and give the child the full power of eating and chewing like a normal human being. By this time, your child is almost 3 years old, which is the general age at which a child has the first full set of teeth.

Hope you finally got the answer to ‘What order do baby teeth come in?’

Just like that, your cute infant baby, who seems to be born just yesterday, gets his or her first full set of 20 milk teeth in the glimpse of an eye, and this is just the beginning of the speed at which they grow. Before long, your child will be allowed to start primary school, and then high school, and then even college, and you will be left a proud and happy parent.

Learn more about Signs, Symptoms and Remedies during Teething in Babies 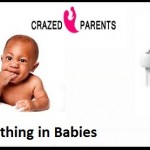 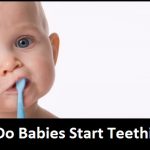 When Do Babies Start Teething?